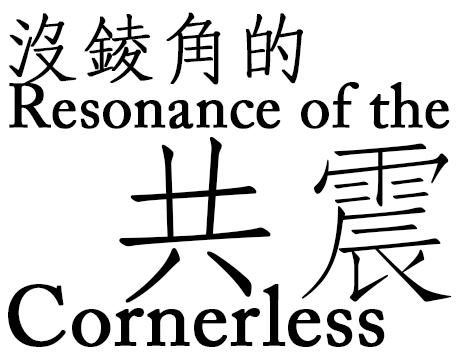 The idea of “cornerless”, or circle, plays a very important role in Chinese philosophy. In ancient China, people believe that the world was originated from T’ai-chi, which later on transforms into yin-yang, the mother of the sky and the earth. Ancient people regard the sky as an infinite loop that survives forever, and the earth as a static object that supports everything—they regard the sky as “circle”, and the earth as ”square”.  Tam-tam, being one of the oldest Chinese instruments, first appeared around 200 B.C., also shows a sense of “forever-ness” with its long decay rate and circular shape. This work experiments the resonances through the interplay between different materials and the tam-tam.

This score is a graphic representation of how the piece should be executed. Because of this unusual instrumentation, it is almost impossible to notate exactly what the composer intended with traditional notation, particularly with the positions on the tam-tam. This notation provides a clear roadmap for the performer to follow. The score is to be read according to the roman numerals, and it uses kind of a computer-programming algorithm, so that the performer can follow step by step on how to play the work.